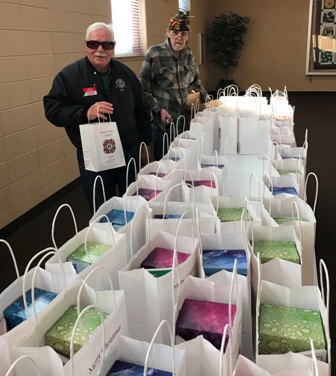 For as many years as they can remember, Julius Mianecki, former Quarter Master, and Larry Fleiss, former Commander of Somers VFW Post #2751 have assembled and delivered Christmas gift bags to veterans who live at Manor Care, Brookside, and Water’s Edge nursing care centers in Kenosha.  Somers VFW Post #2751 has disbanded and merged with the Pleasant Prairie VFW Post #7308; however, Mianecki and Fleiss continue the Somers tradition.  “Veterans who live in nursing homes will know they are not forgotten”, said Mianecki.

Care packages include items such as tissue, playing cards, puzzle books, and personal care items.  Some items are donated and other are purchased with funds raised from the VFW.