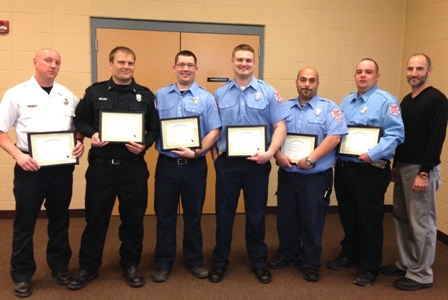 At the Village Board meeting held on April 26, 2016, Dr. Ben Feinzimer, Kenosha County EMS Medical Director, and Somers Fire Chief Carson Wilkinson, recognized members of the Somers Fire & Rescue Department for their dedication and exemplary service to the community.

Ben Feinzimer stated, “On the evening of March 12, 2016, Somers responded to a call for a man down.  As the ambulance and engine companies arrived, they initiated life-saving interventions that ultimately saved a 33-year old man.  Although each of the rescuers will minimize their individual roles, it was their collective effort resulting in this person walking and talking today.”