Click here to view the current draft of the proposed Agreement dated August 15, 2017.

Following the hearing, the approval process will continue.  Written public comments may continue to be accepted by the three municipalities concerning the proposed Agreement for a period of twenty (20) days.  The comments, which were received at the public hearing, together with any written comments will then be packaged up with the Agreement and sent to the Wisconsin Department of Administration.

Village President, George Stoner, made the following opening comment at the hearing:

“With the spike in recent development of farm land, especially near the I-94 corridor, Mayor Antaramian of the City of Kenosha, Ed St. Peters of the Kenosha Water Utility, Chairman Virgil Gentz of the Town of Paris, Supervisor Ron Kammerzelt of the Town of Paris, Chairman Mark Molinaro of the Town of Somers, and myself, came together to discuss the rapid growth in Kenosha County, and the challenges of providing water and sewer near the I-94 corridor.  We all agreed that it was in the best interest of the future generations of our communities to address the issues now. By October, 2016, all of us reached an agreement to end boundary, water, and sewer battles.
Teams were created representing each community consisting of elected officials, staff, and advisors.  The document was reviewed, fine-tuned, and changed many times.  I want to thank everyone who invested the long hours and evening meetings to make sure this agreement addressed all the issues.  Successful development happens on purpose – not by accident.  I believe this final agreement assures thoughtful and orderly development.
This Intergovernmental Agreement removes obstacles, provides clarity, and it represents the best ideas and solutions for each community.  Somers, Paris, and Kenosha will now be a team, working together representing southeast Wisconsin as we welcome new business and residents to Kenosha County.” 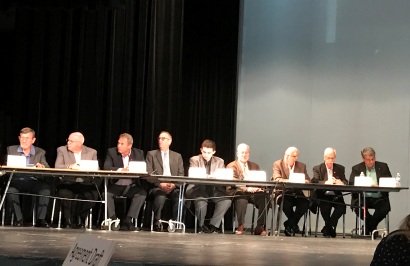