Although Petrifying Springs Park is a Kenosha County Park, it is located in Somers Township and it deserves an honorable mention because the Village of Somers was first settled by our early pioneers on the property that is now known as Petrifying Spring Park.

This 350-acre park is known for year round scenic hiking, mountain biking trials, cross country ski trails all along the Pike River and its hilly terrain forested area.  A new handicap accessible, off-road, fairly level, hard surface trail was completed in 2012 and it expands the entire lower level of the park.  Ball diamonds, covered and uncovered picnic areas, volleyball courts, playgrounds and seasonal restrooms are available.  Click here for details about hiking, trails, maps, and descriptions of the park.

A picture is worth a thousand words! 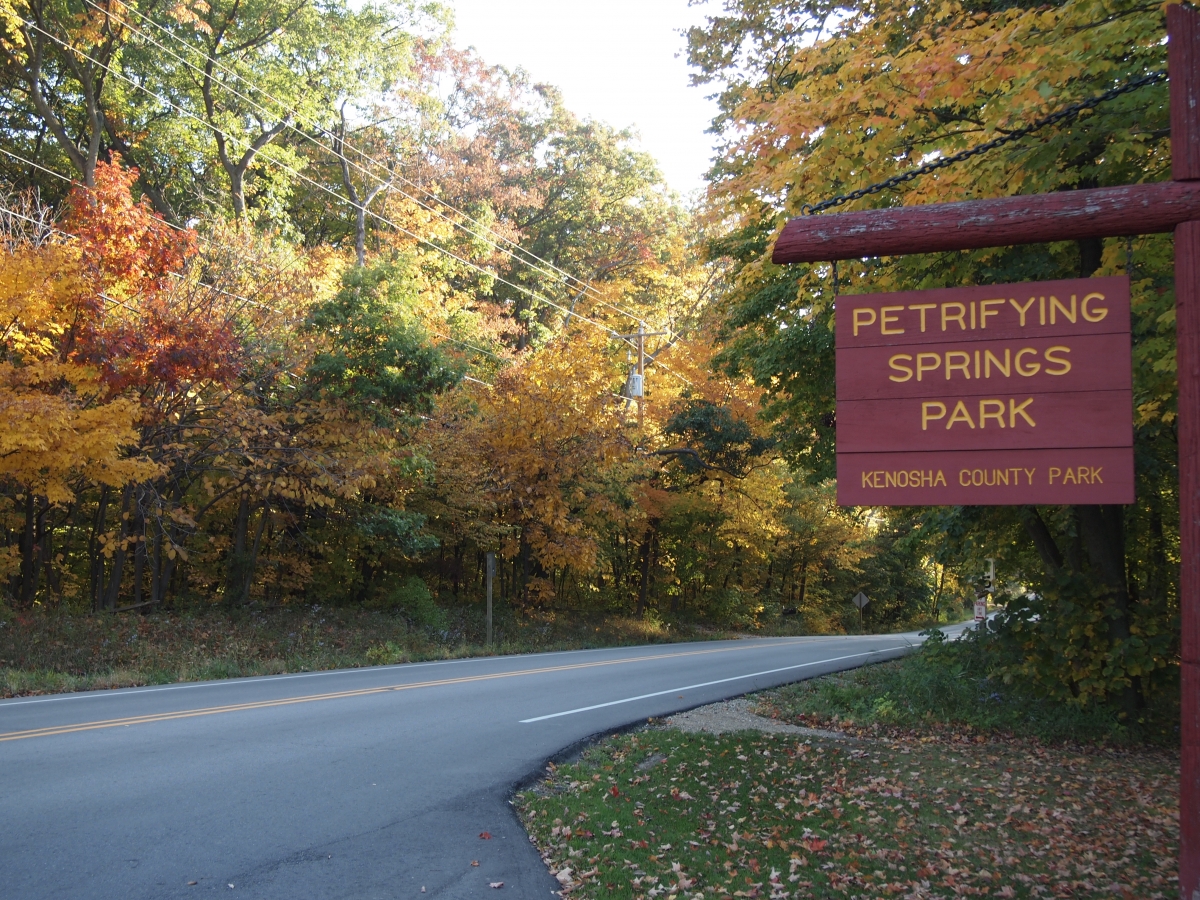 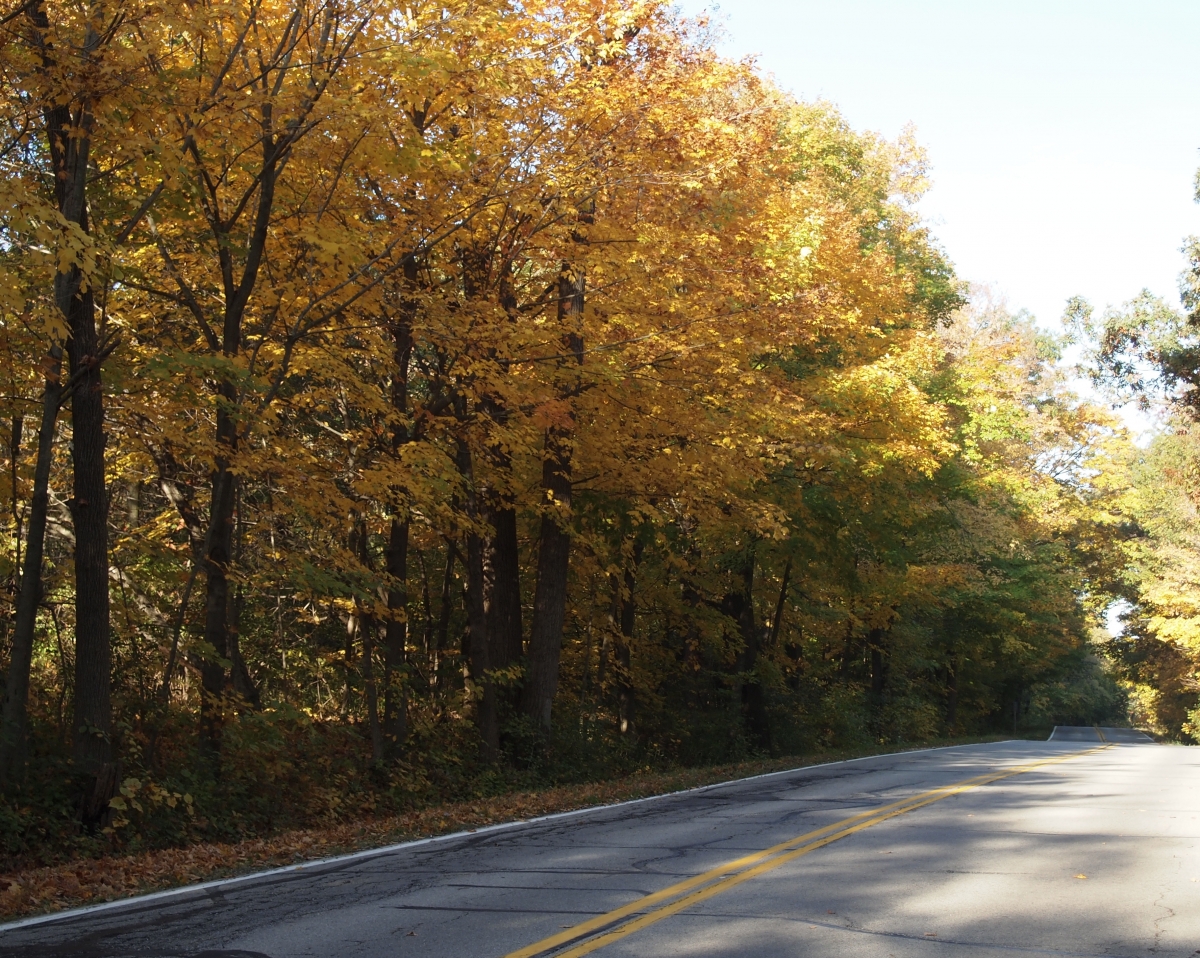 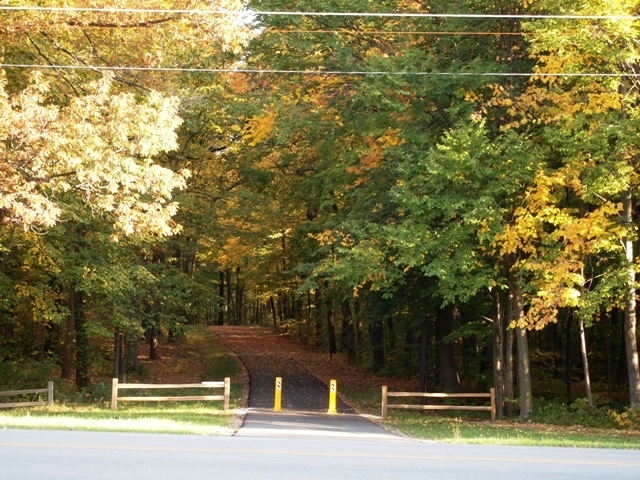 Petrifying Spring Park comprises of approximately 350 acres of woodlands, flora, and river basin. It first opened April 1, 1928. The name was derived from a Calcareous formation that appears on the South Ravine. The ravines, basin, and winding Pike River are remnants of a geological period, the Pleistocene Epoch, which started one million years ago. A continental glacier formed by snow turning to ice and it moved southward from the Labrador-Hudson Bay Region until it covered North America as far as the Ohio and Missouri Rivers.

On the South Ravine, at several locations, water trickles from the hillside. Early settlers called this run-off “The Indian Springs”. The water was believed to have great curative powers and was the favorite stopping place for Potawatomi Indian people and early travelers to rest and drink the cool refreshing water. The low basin, with meandering Pike River, formerly occupied the setting of an old Indian camp site. Archaeologists and farm people have found arrowheads, trade items, and other artifacts in the park, adjacent farm fields, and nearby University of Wisconsin Parkside campus grounds.

An explanation of the springs hydrology is given by G.F. Hanson, State Geologist, University of Wisconsin-Madison. ?He states, “The ‘spring’ that furnishes drinking water in the park is a drilled artesian well in the Niagara dolomite, but the spring on the hillside is not an artesian flow but a contact spring. It is caused by rainwater percolating downward to a relatively impervious layer and then emerging as a spring from the hillside. The petrified sticks, acorns, etc. that occur at such springs are not petrified in the sense that the organic matter is replaced with mineral matter. It is simply covered with lime. It has taken many years for the lime-laden water to form the moss-like stone which appears on the South Ravine, and can be seen along the hillside trail. It lies just under the leaf humus.”

The last ice movement, known as the Lake Michigan Lobe of the Wisconsin stage, left a colossal hallmark upon the landscape. In the forward advance, ridges developed on the east and west outer edges of the huge lobe, thus causing earthen dikes of terminal moraines. Highway 31 follows the top of one of these moraines. At the park, the highest elevation is approximately 120 feet above lake level. Sighting toward the east horizon, Lake Michigan can be seen about three miles away. South on Highway 31, approximately two miles from the park, is a U.S. Coast and Geodetic Survey bench mark. This point is the highest elevation of Highway 31 between Chicago and Milwaukee at 164 feet above lake level. During the last stages of the retreating ice lobe, the tempestuous volume and force of melting water, carved the some 100 foot deep ravine through the park as it shows today.

Rolling Terrain of the Area

As the volume of glacial melt water was impounded with other watersheds, it formed glacial Lake Chicago, with water overriding the land to a 55 foot stage above the now lake level. Most of the city of Kenosha was inundated to 30th Avenue. This high stage or beach is known as the Glenwood Stage and can be seen one-half mile east of the park, east along UW Parkside’s Tallent Hall, south along 30th Avenue. It is visible just west of the Kenosha Technical Institute.

Glacial Lake Chicago soon found outlets at the now Chicago River joining the Illinois and Mississippi river then south to the Gulf of Mexico. Another outlet moved eastward through Lake Huron, Erie, and Ontario and the St. Lawrence River to the Atlantic Ocean. Glacial Lake Chicago later became Lake Michigan. The lake then established the now mean level, predicated at 580 feet above sea level.

Pike River also receded with lake levels and established a well defined watershed. Head waters of the stream meet at the northwest corner of the park and Highway 31 flowing easterly through the park, UW Parkside Campus and Kenosha Country Club. One-half mile from Lake Michigan, near Berryville, it turns at right angles following a southerly valley course of about three miles through Carthage College Campus, Alford Park and finally joins Lake Michigan north of Kennedy Park.