Somers Fire & Rescue Dept. Capt. Ben Andersen is in line to become Fire Chief. Andersen has been appointed Deputy Chief and will keep that title until Fire Chief Carson Wilkinson retires later this year.
Wilkinson is working closely with Andersen until his retirement to make it a smooth transition.

“I am excited that he will be the next fire chief,” said Wilkinson. “He is as dedicated to Fire and EMS as I am and has experience on more than one department.”

Wilkinson has been Chief for more than five years.

“Chief Wilkinson did a great job getting a lot of new equipment while he was here,” said Andersen.

An ambulance and some other small equipment are all that is left to be updated.

Becoming Fire Chief is the culmination of a life-long interest in the fire services for Andersen.

Andersen was born and raised in Racine and lives in the Village of Somers. He started on the Somers Fire Department as a paid-on-call member in 2006.

In 2010, he was hired full time by the Village of Bristol and four years later, he returned to a full-time position in Somers. He was promoted to lieutenant in 2017 and captain in 2020. He is the team leader for the Kenosha County Dive Team.

“I have a deep passion for the fire service,” he said. “And this department especially. Somers gave me my start and it has amazing members.”

As the new Chief, one of Andersen’s challenges will be staff retention. Somers has been a great training department for many firefighters in the area, who too often leave the department for higher pay or full-time positions on other departments.

Andersen will be working with the Village Board to find funding to hire full-time firefighters. He also hopes to offer better incentives for paid-on-call members in order to improve retention.

“Somers as a community is growing very rapidly,” Andersen said. “We need to grow with that demand.”

He also plans to have more training for firefighters in specialty areas such as water rescue and hazardous material.

“As we get more industry, there’s more chance for hazardous materials calls and technical rescue calls,” he said.

It is an exciting time for Andersen, as he and his fiancée, Amanda Killips, plan to marry this fall.

Andersen  was sworn in after the  Aug. 3, 2021 Village Board work session. His father, Calvin Andersen, pinned his new badge on his uniform. 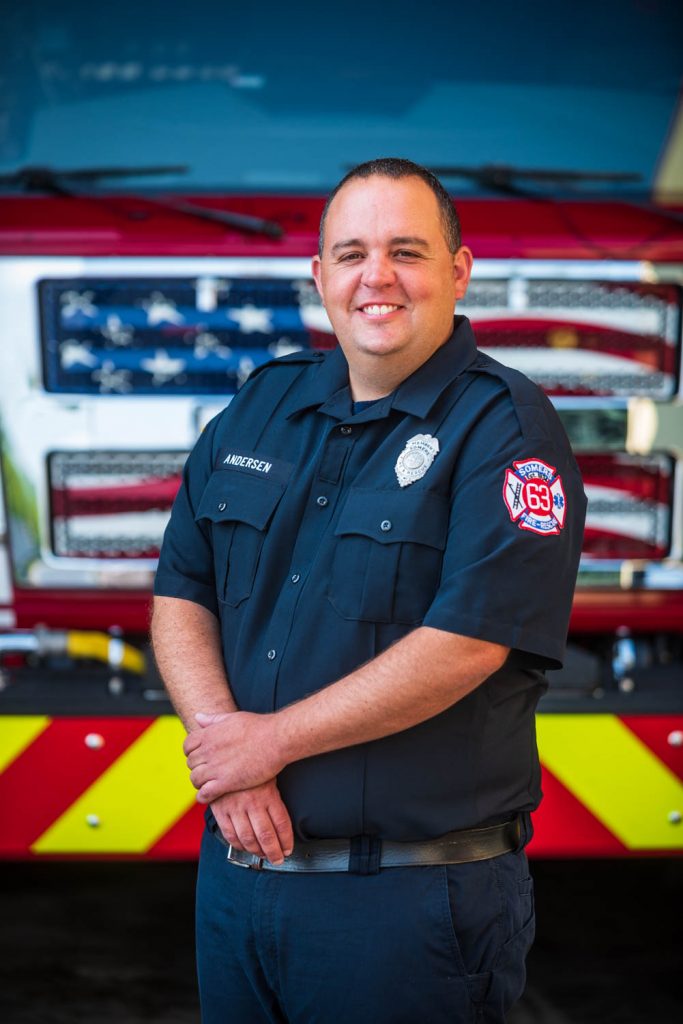