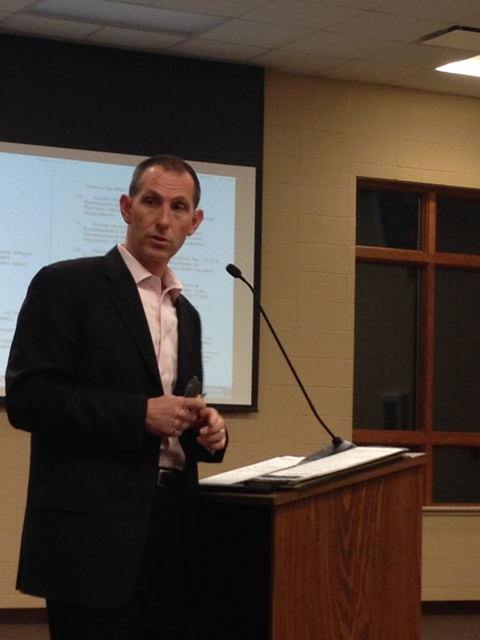 Gateway announced, in their news release dated January 20, 2016, that it will develop an emergency vehicle operations course (EVOC) on land leased from the University of Wisconsin-Parkside in the Village of Somers.  The track would be developed on an abandoned Parkside parking lot on the east side of Wood Road.  In addition to the availability and current underutilization of the proposed site, the cooperative agreement for the location of the EVOC is another component of the transfer agreement in criminal justice between the two institutions of higher education.

Representatives of UW-Parkside and the Village of Somers confirm that the EVOC track project is in the planning and designing stage.  The project has not been finalized and there will be ample opportunity for public input at future meetings.

The emergency vehicle operation course has been held in the parking lot of the former Dairyland Park; however, the facility is now for sale which forces Gateway to search for a new location.  The EVOC track is used to train law enforcement officer cadets and working professionals.  All Gateway Law Enforcement Academy cadets are required to complete and pass defensive driving standards to be eligible to graduate.  Additionally, all current law enforcement officers are required to attend eight hours of EVOC training every two years.

At the Village Board meeting held January 26, 2016, Jim Smith, former Town of Somers Chairman, expressed his concerns about the EVOC track.  Responding to Mr. Smith’s comments was Mark Molinaro, current Chairman of the Town of Somers and an architect at Partners in Design Architects in Kenosha.  Molinaro is the principal in charge of Gateway’s $1.5 million EVOC project.

Jim Smith’s major issue with the project was that it appeared to be a “done deal” and that citizens did not have an opportunity to ask questions or provide input on how the track would impact the neighborhood.  Molinaro responded by stating that in addition to Gateway’s January 20th news release, GTC and UWP held a joint public meeting on December 17, 2015 from 5:30 to 7:00 PM on Gateway’s Kenosha Campus where the public was invited to learn more about the project  and ask questions.

After Molinaro’s presentation, several members of the Village Board asked questions and requested a follow-up meeting to learn more about the proposed project specifics.  Gateway will schedule another public hearing on the EVOC track where the public can learn more about the project and have the opportunity to ask questions.  The next public hearing will be announced in the Kenosha News and on the Village/Town of Somers website.