The Salvation Army of Kenosha launched its annual Red Kettle Christmas Campaign on Friday, November 11, 2016 at the Somers Festival Foods, located on Highway 31 and Highway S, from 12 noon to 2:00 PM. The Red Kettle Christmas Campaign Honorary Chair was Village of Somers President George Stoner.  Joining Stoner was Jim Smith, former Chairman of the Town of Somers Board of Supervisors, and other members of the Somers staff. 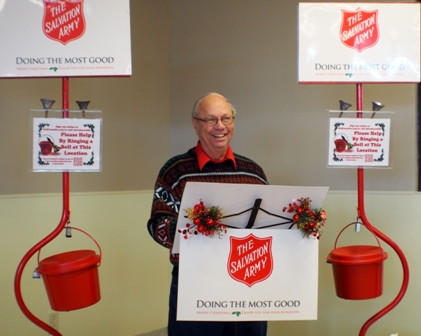 Thank you Marie Lewis and The Salvation Army for inviting me here to help kick off the 2016 Red Kettle Campaign.  As President of the Village of Somers, I am honored to serve as the Red Kettle Christmas Campaign Honorary Chair.  The Salvation Army is an exceptional organization that help many people in our community who very much need their support and care.

I am not surprised that Festival Foods is host to the launching of this year’s campaign.  As one of our new businesses in Somers, I have had the privilege to get to know the Festival Foods leadership team.  They are a family company who has demonstrated many times that they give back to the communities they serve, and we are thrilled they chose Somers to build this new store.

I am also very happy to be here today with Jim Smith, former Chairman of the Town Board of Supervisor of Somers.  As leaders in our community, both of us are looking forward to ring the bells today, kicking off the first shift of the Red Kettle campaign.

In closing, let’s get this campaign started!  I will be here holding the red kettle ready to accept contributions from everyone.” 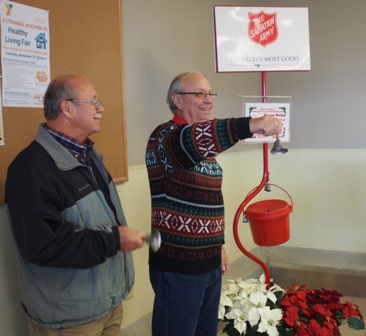 Jim Smith, former Chairman of the Town of Somers Board of Supervisors
George Stoner, President of the Village of Somers
Ringing the bells at the campaign kick-off event at Festival Foods on November 11, 2016 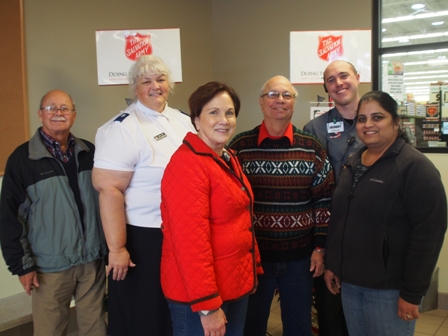